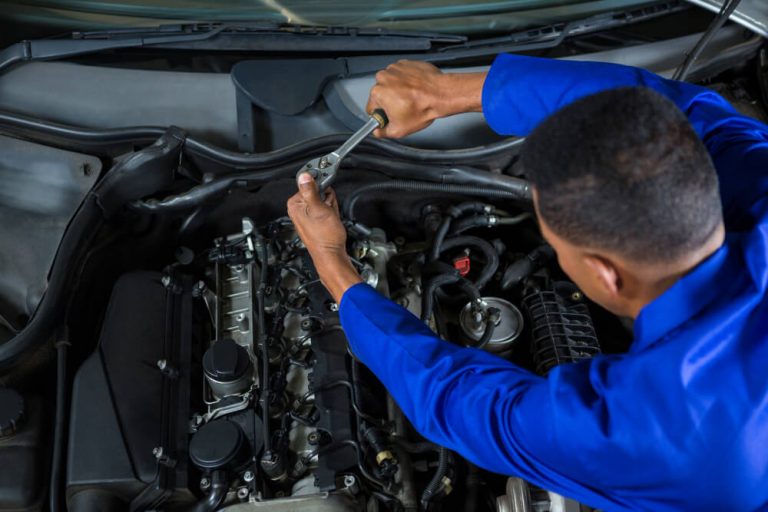 When a slew of symptoms begin to appear that can affect how the engine runs, owners of older vehicles may notice telltale signs that parts of their cars are beginning to wear out.

With age and use, parts may begin to fail, causing an engine light indicator, issues with the engine revving and winding down at idle, and other issues with the vehicle’s performance.

Engine RPM can fluctuate at times when it shouldn’t, especially when idling, which usually indicates either a minor or major issue that needs to be addressed immediately in order to keep the car running properly.

There is a risk that more expensive repairs may be required if the problem is caused by an old part that wears out, is ignored, and then causes other parts to wear out as a result.

Causes of RPM Idling Up and Down

If you have driven a vehicle for a certain amount of time, you will become familiar with how it handles and how it feels under certain conditions. While going along on the highway, the RPM and acceleration should be stable and constant, not fluctuating.

When it is idling at a traffic light, the RPMs should drop below 1000. The car should also vibrate in a certain way when it’s idling, usually a smooth, steady vibration, but if there is an issue, it might stall or begin to shake.

If you notice that your car is starting to behave differently while it is being driven, you might have any one of the following problems:

Automatic transmissions are now standard equipment in the vast majority of vehicles on the road, especially those manufactured after 1995. In automatic cars, the gears switch on their own as you accelerate.

To shift gears in a manual transmission car, the driver must use a clutch, which is what interacts with the transmission.

A worn-out clutch will not be able to perform its intended function of engaging the gears, especially when shifting into idling mode. In most cases, this slows the RPMs down, even as the clutch and gas pressure increase.

Your car’s engine has a small valve that opens when it is idling to allow a small amount of fuel to flow into the engine, which is necessary to keep it operating steadily.

In the event that this valve fails, the transmission and RPMs are affected, resulting in an abnormal amount of fuel being distributed.

The car might speed up too much when the gas pedal is engaged, or it might have difficulty maintaining speed even if you are no longer accelerating or driving along the highway.

Similar to a leak in the transmission fuel line, if there is a leak in the vacuum that is created inside the intake manifold, which is an area of the car engine where the fuel and air mix, this can cause an imbalance in the ratio of fuel to air mixture.

It will result in higher RPMs and slower acceleration. This is also often accompanied by a high-pitched whine from the engine.

Most engines require combustion of the fuel in order to create power to move forward. The spark plug is a part of the engine that engages this process. When they wear out, this causes an imbalance in the air and fuel mix, resulting in an uneven burn of the fuel, and inefficient use of the fuel that is available.

The parts of the engine known as the crankshaft and camshaft must be synchronized in such a way that air and gas can be let in and out in perfect timing to drive the engine pistons.

This is facilitated by the timing belt, and as with any component of an engine, it can wear out over time. When this happens, the RPM at higher rates can go up and down unpredictably. When it’s worn down to the point of no return, the car won’t start at all.

Another component of this equation is the engine’s air filter, which allows air into the engine for combustion purposes. An improper mixture of fuel and air results in decreased acceleration and abnormal RPM spikes when either of these is worn out or clogged.

What to Look Out For

A tachometer, with its hash marks around it to indicate engine revolutions per minute (RPM), should be standard equipment in every car. The red warning line that appears on most tachometers around 6000 RPM and beyond denotes the point at which the engine is at risk of damage from further revving.

It is expected that when you press the gas pedal, you will see an increase in RPM, but it should never exceed 4000 RPM.

If you’re going slowly, you can get away with idling at 700 to 1,000 RPM and driving at 2000 RPM. In order to do any real damage to the engine, RPMs have to stay in that red zone for a long period of time. Putting too much strain on an engine, especially an older one, could shorten the vehicle’s lifespan.

There will be other indicators if your transmission is malfunctioning, such as high and low RPM engine revving.

This could be a sign that the transmission is faulty if the car won’t start, if the gears don’t sync properly, or if you smell something burning. RPM anomalies may simply be a sign that a part needs to be replaced if you don’t have any of the other signs and symptoms listed above.

There should be no erratic and random increase or decrease in RPMs in the working engine. Take it to a mechanic as soon as possible if your car is behaving this way.

Many of the issues listed here may be inconvenient to repair and pay for, but they can lead to far more costly problems if they are not dealt with. The problems listed here are minor and will not cause lasting harm if addressed early on.

Can a Bad Throttle Body Cause Transmission Problems?