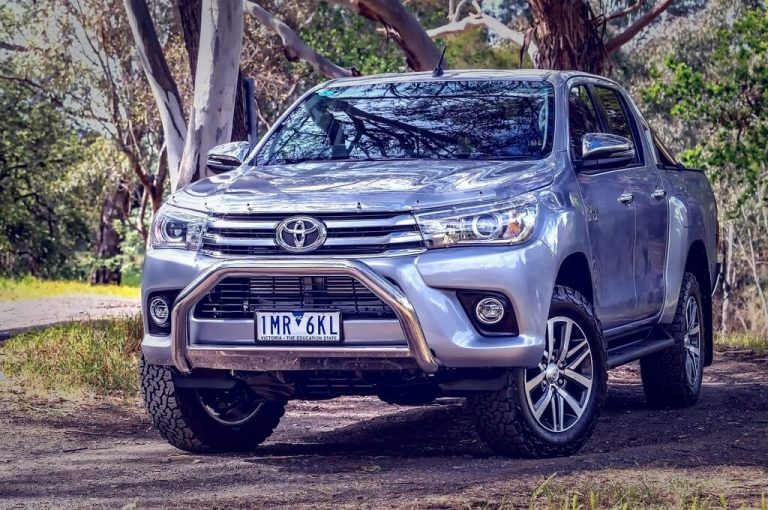 Some vehicles are part of series lines, so companies can develop their vehicles to have certain features. If a vehicle has letters and numbers in the name, it is part of a series line the handle SR5 stands for Sport Runabout 5 Speed. It is a line of trucks created and manufactured by the Toyota company.

Table of Contents show
1 What Does SR5 Mean?
2 Are the Toyota Hilux the only vehicles that have the SR5 branding?
3 What Does Each Word Mean?
4 Does SR5 have something to do with engineers?
5 So, what does this all mean?
6 Conclusion

What Does SR5 Mean?

When a car company creates a new vehicle, they give the new vehicle a name along with the make and model. This is to help categorize the vehicle. Plus, car manufacturers can’t have vehicles with the name one, two, or A or B. That would not only be confusing, but it would also be downright boring.

Every single vehicle has a make and model and it’s usually displayed on the back of the vehicle. Along with makes, models, and years, a vehicle can also be part of a line of vehicles.

When a certain vehicle performs well, the company that designed the vehicle will want to use the design and features of that vehicle later in the future.

No company in their right mind would leave behind a winning design. When they create future models of the original vehicle, they will tweak the design, add new features, and improve old features that were a hit with customers.

Now, what is the SR5? It is a name of a line of vehicles that the car company Toyota created in 1972. SR5 stands for Sport Runabout 5 Speed.

When the SR5 series was first introduced back in the 1970s, it became a very popular series. The main reason for the SR5 popularity is because any vehicle created by Toyota that had the SR5 brand came with a 5-speed manual transmission.

At the time and since the creation of cars, most consumer-ready vehicles had only four different speeds. If a vehicle were to have 5 speeds, it was usually much more expensive and part of a luxury line. Adding a 5th speed to a regular vehicle made Toyota a game-changing company and the Hilux SR5 became a popular vehicle.

But that’s not all that came with the Toyota Hilux SR5. This type of vehicle would also come with power windows and power locks.

So, The Toyota Hilux and the SR5 are Interchangeable Because They are The Same Thing?

Are the Toyota Hilux the only vehicles that have the SR5 branding?

When the Toyota car company wants to make a type of car that matches the SR5 branding, it will use the SR5 line brand.

What Does Each Word Mean?

The Toyota manufacturing company did not choose to name their Toyota Hilux SR5 because it sounded catchy. As explained above, the SR5 stands for Sport Runabout 5 Speed.

But these features are not the only features that come with a vehicle that has a label SR5.

Most Toyota vehicles now come with cameras and sensors for backing up, Bluetooth technology, as well as seat warming technology. Some vehicles even have green technology built into them so the vehicle can run partly on electricity.

Does SR5 have something to do with engineers?

You may have heard that the SR5 term stands for the five engineers that developed the 5-speed steering system for the Toyota company.

Well, that would be a really cool thing for a company to do, to name a vehicle line after five top senior researchers, it turns out this is not true.

If it is true that Toyota uses the term SR5 in regard to their engineers, it is for a different reason.

There may have been a group of senior engineers that developed something for the Toyota company, but it wasn’t the 5-speed steering.

The 5 engineers may have created the Tacoma truck. The Tacoma has been one of the most popular cars that Toyota has ever made.

The 5 engineers that may have created the original Tacoma Truck are:

However, the connection between the Tacoma truck and these five engineers is currently unproven. On the Wikipedia page, there is nothing about any of these men. But Wikipedia does have a long history of the Tacoma truck.

So, what does this all mean?

While the SR5 can have a variety of different meanings, all of the meanings are somehow linked to the Toyota company.

The term SR5 has a couple of different meanings and most of them pertain to the Toyota company. Toyota started using the SR5 line in the 1970s when they created the Toyota Hilux. The SR5 was a special sport option that a consumer could choose if they wanted a Toyota Hilux that was designed for more adventurous roads and travel.

SR5 can also mean the five Engineers that developed the Tacoma truck. Unfortunately, this link to the term SR5 is not proven.

But the SR5 isn’t used just for the Hilux and the Tacoma. The theater company is currently using the brand SR5 to indicate to consumers that there are upgrades and options available for certain vehicle lines. The SR5 is still being used as a sports package even though some of their luxury vehicles have an SR5 option.